SHERRI OBERMARK: AUTHOR
Reckoning with Ourselves is an illustrated meditation on the causes of chronic pain and it illuminates the many positive things we can do to change our condition and resolve our pain. this book explains the basic function of chronic pain from its physiological foundations, describes the effects on the body, offers solutions to the immediate pain problem, and gives concrete solutions to reverse the cause of this universal, human condition.

​Reckoning with Ourselves describes that chronic pain isn’t a physical malady at all, but rather simple normal, biological function that is somewhat out of control. reckoning with ourselves takes a different approach to describe why this condition exists at all and why it persists.

The book is printed in a format that is easy to read and written in a style that is both unique, and entertaining. 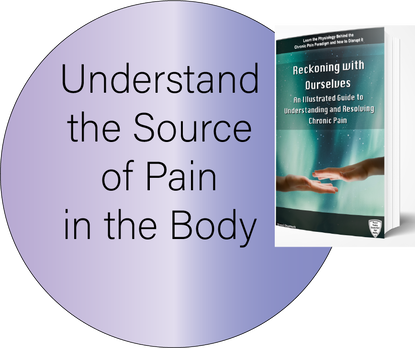 We have the power to change our condition.

Readers will gain a clear understanding of the source of the pain, and a view into the effects of this process on the body. most important to those suffering from chronic pain is the series of solutions to assist in relieving the immediate pain problem and offering concrete solutions to resolve the cause of this universal, and very human condition. this book offers a real world look inside of the body’s wiring, which creates the conditions that cause chronic pain.
What we’re doing isn’t working
- in 2017 an estimated 1.7 million people in the united states suffered from substance use disorders
- the annual cost of chronic pain in the united states is more than $635 billion dollars per year
- every day, more than 130 people in the united states die after overdosing on opioids
- addiction to opioids—including prescription pain relievers, heroin, and synthetic opioids such as fentanyl—is a serious national crisis
- the economic burden" of prescription opioid misuse alone in the united states is $78.5 billion a year 652,000 suffered from a heroin use disorder.
Chronic pain seems universal
It is estimated 1.5 billion people suffer from chronic pain chronic pain, one of the most common reasons adults seek medical care dependence on opioids anxiety and depression poor perceived health or reduced quality of life population-based estimates of chronic pain among U.S. Adults range from 11% to 40% an estimated 20.4% (50.0 million) of U.S. Adults had chronic pain 8.0% of U.S. Adults (19.6 million) had high-impact chronic pain, with higher prevalences.

Reckoning with Ourselves: An Illustrated Guide to
Understanding and Resolving Chronic Pain
​Available at Amazon.com